I’ve been searching for a boat for the past six months that would be a bit better suited to the upcoming 100-mile James River Rundown.  My ocean kayak is a bit slow and heavy and my faster boats, such as the Phoenix Match II and Cobra Viper, are probably a little too cramped to comfortably paddle them for 17 or 18 hours and probably a little too tippy when physical exhaustion and fatigue set in.  Face it, skinny boats require good posture and balance the whole time.  I don’t think I’m going to have those things for all 100 miles.

I hadn’t found much on the second-hand market, except for an awesome boat in the New England Canoe and Kayak Racing Association classified ads that got bought out from under me, so I asked a friend if I could borrow her Pyranha Speeder for the race and she said yes so I thought that was going to be my boat.

As luck would have it, I found a guy in Roanoke, Virginia with a Prijon Beluga listed for sale on Craigslist.  I knew exactly what that boat was because I had looked at one years ago prior to buying the Viper.  That particular boat was just a shell with no seat or outfitting and I thought the guy wanted way too much money for it so I passed.

Funny how things sometimes come back around.

So Sunday when I was done riding my bike in the Storming of Thunder Ridge ride in Lynchburg, I made a little extra drive to Roanoke to check out the boat.  I knew these boats are old and feared it might be in pretty rough shape.

The boat was faded on the bottom from sitting out in the sun and it had a dent on the bottom so I was leery.  The rest of the boat looked solid, though.  No deep scratches or gouges, fully operational rudder system, decking lines, original seat and thigh braces.

I decided to buy it so back to Charlottesville it went on the top of my truck. 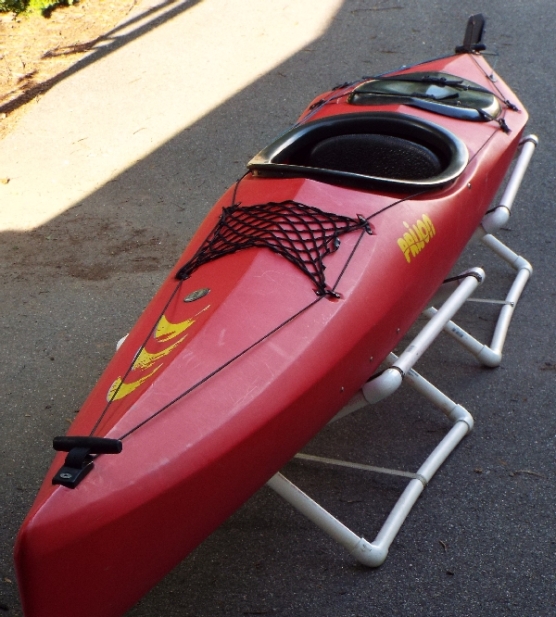 I got it home and cleaned it up a bit, hit it with some Amor All, and then pulled out the heat gun to see if I could pop out the dent, which mostly was a success so then I felt better about my new purchase.

The boat is a really odd, old boat and not much can be found about it online.  I suppose that’s because the boat fits into a very tight niche in the market.  It is a cross between an ocean kayak, a downriver racer, and a fitness boat.

It has a narrow’ish hull and therefore is somewhat tippy on primary stability but has wings similar to a wild water boat like the Wavehopper so the secondary stability is outstanding.  The narrow hull allows for good stroke technique with a wing paddle yet it has a watertight, bulkheaded hatch in the stern to allow for packing gear.  At under 15′ long and with the added rudder, you might look at the boat and suggest it does not know what it wants to be when it grows up.

What I see in it is exactly what I was looking for.

Something on the fast end of the scale for being plastic, it’s plastic so it should be virtually indestructible against rocks, it has a roomy cockpit so I’ll be able to move and shift my body and legs around and fidgit a bit, it has a sealed hatch for packing supplies, and it is very stable when compared to true racing boats so I’ll be able to lean back and stretch my back and twist my torso to stay loose without fear of flipping over.

I took it out last night after work for a maiden voyage and I was easily able to maintain 5.1mph in light wind over the 5 miles I paddled it.  It certainly is no speed demon, but it is very fast for what it is and I think the trade off in speed for the added stability and maneuverability is the right mix of boat attributes for this race.

I’m becoming an aficionado of old-school boats.  Maybe because they are old and underappreciated, like me.