My first kayak race was in the Spring of 2007 on our local river, The Rivanna.  I was paddling with my paddling buddy, Konrad, one day when he asked me if I was going to paddle in the upcoming local race.  I had no idea what he was talking about and he explained that this was to be Year #2 for a local, 6.2-mile river race.  I laughed because I thought he was joking.

After a little more conversation I realized Konrad was serious.

As race day approached, I found out there was a parent-child division so I decided I was take our oldest son with me.  He had already been out with me several times in our Loon 138 kayak and he enjoyed it.  With its extra large cockpit, I was able to seat him in front of me on a block of minicell foam and still have plenty of room.

I knew nothing about kayak racing, mind you.

When the race started, I paddled like crazy at first but then decided to just paddle moderately hard but steady for the rest of the race.  I figured that even if I wasn’t the best paddler that if I kept paddling without ever stopping that probably gave me an advantage.  This is a concept I still apply to this day.

Well, Josh and I won the parent-child race that day which came with a nice trophy and $50. 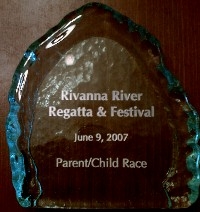 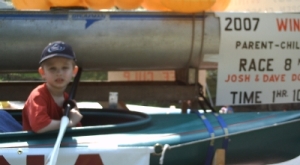 The following year I took our daughter for the same race and won it with her, too.  So you can only image the pressure the third year I raced it with our youngest son.  His older bother and sister each had a trophy so if I didn’t get one for him it would be a huge disappointment and we would probably have to try again next year.  Besides, I was ready to race in the men’s solo division by this point and I didn’t like the idea of delaying that by at least another year.

Fortunately I won with Ben that year so I was three for three in three years in the parent-child division.

I was hooked.  I was also ready to compete solo next year. 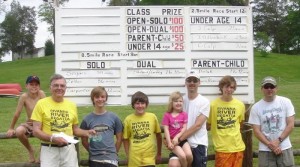