Yesterday I made my way to Barbourville, KY for the 3rd annual Cumberland River Challenge.  It was my first time ever on the Cumberland River and I did not have much of a guess as to exactly what the river would be like or what the skill level of paddlers would be.

Prior to leaving home, it didn’t take me more than about 2 seconds worth of thought to decide which boat I would take, because it seemed obvious to me the Phoenix Match II ought to go back home to her Kentucky roots and race on her home river.

I arrived in the town of Barbourville a little after 8am which was about an hour before assembly time and nobody was at the registration spot so I quickly walked down the boat ramp at the finish line to see what the river was like, saw that it was very low, and then wandered back into town and grabbed a cup of coffee at the only cafe I could find open, The Oven Mitt.  I walked in and immediately was met by a horse saddle as part of the decor along with a table lamp affixed to the ceiling by its base.  CMT videos were  playing on the screen behind the breakfast counter.

My kind of place.

I slurped down a cup of coffee and then set out to explore the town a bit.

Barbourville is a quaint, small town with a true town square with the county courthouse right in the center of the square.

As I snapped a few pictures while the morning fog was clearing, I couldn’t help but wonder if the Duke boys were about to come buzzing into town and zip around the town square while being chased by Sheriff Roscoe.  (Note: Barbourville, please don’t yell at me.  Yes, I know you are not Hazard.)

Alas, the morning was to remain silent for a while and the only racing around town that day was to be on the river. 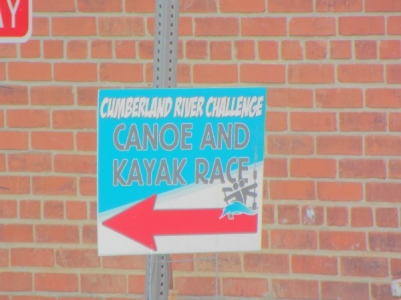 As 9am neared, I made my way back to the assembly area and to my surprise, quite a few people were there by then.  I checked in, unloaded my boat, and began chatting with some of my fellow racers, asking them about the river, obstacles, etc.

I prepared my gear and had both my Fenn 1 and Fenn 3 wing paddles in my car and decided to use my Fenn 1 simply because it is more beat-up.  I did not wish to bang up my newer, better Fenn 3 flat water paddle.

The Fenn 3 would have been my preference because of its smaller blade surface area, but in the interest of preserving my gear, my arms and shoulders would have to pay the price for paddling larger blades for 15 miles.  I knew that was a lot of miles to be scooping water using the larger blades.

Paddlers were given a safety briefing and then all the boats were loaded onto boat trailers (one of which was actually a cattle trailer) and then all paddlers loaded into a few shuttle vans that were waiting for us and we all caravanned up to the starting line outside town in a small community named Four Mile.

Just the fact that paddlers could all leave their vehicles at the finish line and be shuttled to the starting line with their boats and gear was a huge positive and already made this event one of the better organized and managed races I’ve experienced.

We put in the water for a shotgun start at ~11am, the race official gave us warnings at 5 minutes, 3 minutes and then 1 minute to go, gave us a countdown from 10 seconds, and then we were off.

I started several boats back at the start and had to deal with quite a few waves from other paddlers. If you recall, this sent me across a river sideways once in this boat at the start of a race, a fact that I was well aware of, so I was determined not to let that happen again.

I kept control of the boat and kept it pointed downriver to soon realize there were three or four paddlers who jumped out to a strong start and had a bit of a lead on everyone else.

It took me a little while to catch up to them.  As I caught up, I commented how I thought they got off to a very fast start for a 15 mile race.  Andy, the son of one of them and a strong paddler in his own right (paddling a Pyranha Speeder) shot back, “they do that every year.”  I was able to eventually pass the leaders and I think it took about 4 or 5 miles before I was able to put some distance on the #2 paddler.  He was a strong paddler so I tried to keep tabs on him over my shoulder.

The water was very low and the day grew very hot.

My GPS did not get good signal during parts of the race, but on the plus side that meant there was a fair amount of shade for the first half of the race, being so deep in a hollow.

I tried to paddle my best wing paddle stroke during the deep, flat water portions but those were few and far between which meant the flat water was mostly shallow so I had to take shallow strokes with a low angle using only 1/2 – 3/4 of my paddle blades, defeating the purpose of a wing paddle.  But in retrospect, that helped me reduce some strain on my shoulders from using the larger blades, which I was a little worried about.

Paddling can be funny.

No matter how much planning you do and despite making the best pre-race decisions you think you can, the river always throws something unexpected at you and you have to adjust.  Sometimes it works in your favor and sometimes it doesn’t.

Several times when I did try to really dig in at a high angle, my paddle blade struck rocks or logs or tires that were shallowly submerged in the muddy water and once or twice that alone almost capsized me.

It was a very low water day on a mostly flat water course.  There were, however, several sections of small rapids and small ledges for which there was no clear line anywhere.  I bumped and scraped on many of them and a few times had to use my hands to push myself along off the rocks.

This section of the Cumberland reminded me a great deal of my home river, the Rivanna, with one major difference.

I have never seen so many tires in and near a river than I did on the Cumberland yesterday.  Apart from that, the scenery was beautiful.

I managed to maintain my lead across the finish line and was informed my time was 2 hours and 30 minutes for the 15-mile race, good enough for an overall win and a new race record. 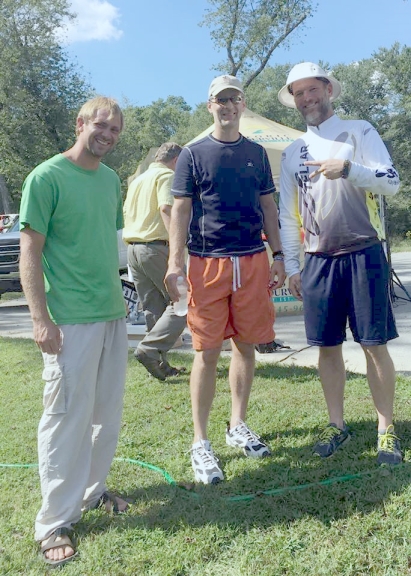 There was a refreshment tent with great BBQ and side dishes at the finish line, a portable sink with soap to wash hands, iced beverages and great fellowship with race organizers and fellow paddlers.  In fact, these were some of the friendliest people I’ve ever met and if I make it back to the race, it will be largely because of them.  They were extremely friendly and welcoming and they run a very well organized event with excellent volunteers.

A few of the top paddlers who I feel are new friends.  The younger gentleman, Andy, in the photo could be a world class paddler one day if he puts his mind to it.

Several of the top boats after the race

After the picnic and obligatory exchange of race stories, there was a small awards ceremony in which I got to shake hands with David Thompson, the mayor of Barbourville, twice, as I received not only one but two awards, which was nice and unexpected.

The awards with other swag courtesy of Barbourville Tourism

I loaded my gear and began my long drive home, and was treated to some of the most beautiful scenery in the country in Southeastern Kentucky and  Northeastern Tennessee.

I had a great time but learned a few things.

1) 15 miles is at the upper limit of comfort tolerance in the Match II.  My legs, lower back, and butt are feeling it today.
2) Great paddlers can be found just about anywhere, not just near big water.  I enjoyed meeting some new ones and exchanging tips, strategies, and ideas.
3) Don’t make a long drive with wet, muddy water shoes in the car on a hot day.

In only its third year, the Cumberland River Challenge is very well organized for its age.  I encourage you to make the effort to get there next year.

It is a little-known gem.


Race start video with a slideshow of my still pictures
My entire, long, boring race video

Some local news coverage from The Mountain Advocate.