The Nelson Downriver race, or locally known as “The Tye River Race,” is normally held the first Saturday in May each year.  It is also typically my first race of the year, one week before my local Rivanna River race so I usually treat it with respect and use it as a gauge for my general preparedness for racing season.

The race got postponed this year until today due to high water on the scheduled race day so the Rivanna Race actually occurred first this year, and since I kicked arse on the Rivanna last Saturday and had added a 19-mile race prior, I felt no need to try to prove anything on the river today for the rescheduled Nelson Downriver.

I took my Pyranha Octane surf ski with me today to test her (and my skills with her) on our first flowing water together.

I picked up Paddling Buddy Dave on my way through Charlottesville in the morning and we made our way to Nelson County.

When we got to the river it looked very low and I quickly surmised I had the wrong boat on the river on the wrong day with the wrong paddler.

This was my first time in any sort of flowing river or rapids with the boat and I saw the river would require maneuvering and I knew my comfort level with her on flowing water was zero.  Literally.  I’d never paddled her downriver.

When I got on the river I felt twitchy in the river current and decided to keep my over-stern rudder up so as not to snap it off in the low water.

Shortly after Paddling Buddy Dave and I started together I realized I would be no match for him today as he was very comfortable in his Epic V7 and kept his rudder down.

So I picked my way through set after set of rapids, making major correcting and steering strokes which greatly killed my speed.  I bumped and scraped on many rocks.  The pollen was so thick in the air that not even my vasodilator/pump supplement trick nor allergy pills did any good and I hacked and coughed my way down the river.

Then the headwind picked up and started blowing me all over the river.

I realized the Octane has a significant amount of rocker and constantly wanted to get sucked into the eddies below rapids.

So when the water was deep and slow I dropped the rudder and when I approached rapids I lifted it up and out of the water which required me to steer via my paddling with corrective strokes again.

I realized how comfortable I’ve become using a rudder to steer and otherwise concentrate on optimizing my strokes for maximum efficiency.

I just wasn’t able to do that today.

Very often when I plunged my paddled blade into the water to try to take solid strokes, the end of the paddle blade immediately hit and bounced off a submerged rock.  Too many times for me to count.

The river was very shallow.

So I worked my way down the river using correcting strokes that were also shallow.

As you might predict, I didn’t do too well and even managed to overturn through Rockpile Rapid.  (Oh, how I hate thee!) 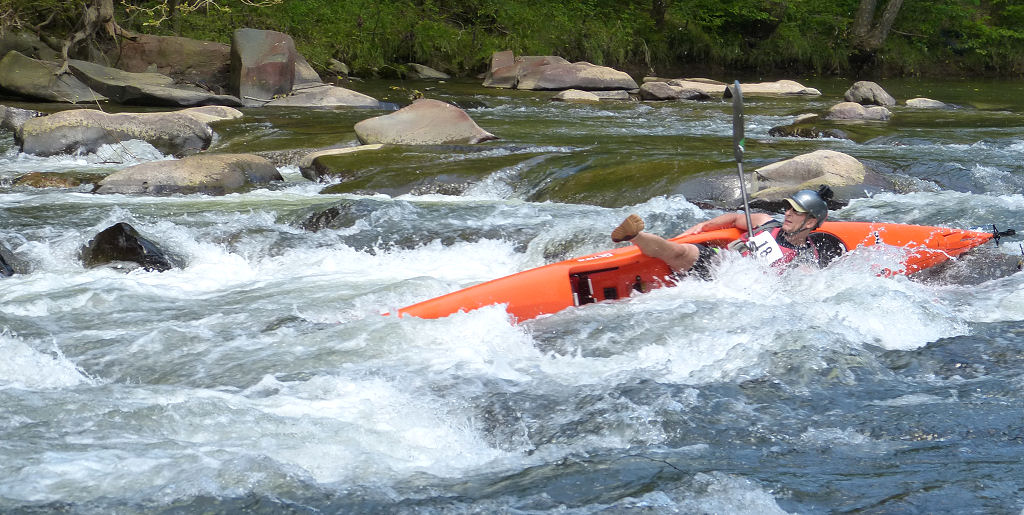 In the end, I finished in second place behind Paddling Buddy Dave, but most importantly I gained downriver experience with the boat and became much more comfortable in it.

The James River will be easy in this boat compared to the Tye.

Grabbed a large cup of coffee along the way to the race with some beef jerky and string cheese for breakfast.  Didn’t eat again until 5pm when I had a Caesar salad with bacon.

PS – After I got home and inspected the bottom of my boat (which was fine) I discovered the Octane has a spring-loaded, kick-up rudder that would have been fine to leave down the whole time.  DOH!  Is it too late for a do-over?  All part of the learning curve I suppose.