Yesterday I returned to Wye Mills, MD to compete in the Wye Island Regatta Kayak Challenge.

It has been 5 years since I last raced this race, last in my Thunderbolt-X kayak in the Racing Single division which put me in with all the surfskis.

Prior to registering for this race I contacted the race coordinator to ask what class I should enter.  I explained my Nelo 510 is a surfski but plastic and 16’9″ long with a beam of 21.6″.

He replied and told me the technical specifications put me in the Recreational Kayak division so I grudgingly accepted that but told him that if anyone at all complained, to please bump me up a class or two, either into the Fast Touring or Racing Single.

So I registered in the recreational kayak division and at the time I registered I was the only entry, which I thought was odd.

When I raced the first year of the Kayak Challenge, there was a plethora of kayaks in the event, so I figured maybe everyone was waiting for the last week before the event to register.

Sadly, there were only 4 or 5 true kayaks there plus myself, and the rest of the field were all males on racing skis.

I hope the organizers address this issue at some point and try to appeal to a broader range of kayakers in the future.  I realize this is primarily a rowing event, but if it wants to include kayaks then I think it ought to try to appeal to paddlers who are below the level of advanced or elite surfski paddler, perhaps with a reduced entry fee for true kayaks or some other level of recognition.

Trust me, the people who showed up in kayaks yesterday worked harder than anyone else.  It was a shame there weren’t more of them.

The organizers bumped up the starting times by 30 minutes to try to beat impending storms, but as luck would have it, as we launched at 8:30am it started raining before we even paddled to the starting line.  By the time the race started at ~8:45 the rain was coming down steadily and at times became very heavy with strong winds and choppy waves.  This lasted for much of the first 5 miles of the race. 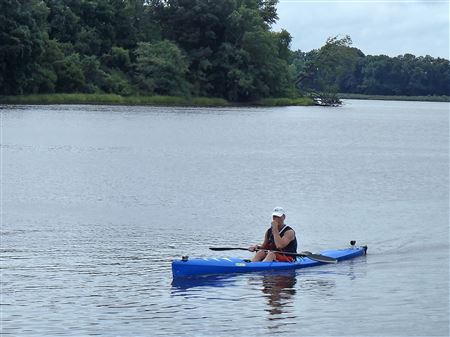 By the time we rounded the far end of the island and started paddling back east, the headwinds were very strong and choppy waves were coming straight at us.  In fact, in this race, the wind and waves came from all different possible directions over the course of the race so those with the best balance and skills in a variety of conditions were rewarded.

My Nelo 510, my tracks from GPS and step count

As I reached the far side of the island, the Kent Island Rowing Club in a 6-person outrigger canoe came up from behind be and slowly passed me into the wind.  We chatted back and forth and a couple times I was able to retake them over the next couples miles.  Their wind profile was so high it was holding them back so I was evenly matched with them under those conditions purely based on out-of-the-water wind profile.

I paddled very close to them for the final 3 miles and tried to catch the last of the composite surfskis toward the finished line, but still came in about 10 seconds behind him.

I ended up taking home the winner’s medal, but I did not feel good about it knowing I beat a really nice guy in a regular 16′ recreational kayak who poured his heart into it.

I felt like I brought a gun to a knife fight.

But there were no Fast Touring kayaks and only 3 men and 3 women in the Recreational Kayak division so even if I entered in the Fast Touring Kayak division (20″ beam or greater & 17′ or longer,) I would have been the only entrant and the race organizers would likely have combined kayak divisions

I wish there was more competition in the kayak divisions.

This was a much different scene from the early years of the Kayak Challenge when there were many more true kayakers. In 2010 there were at least 10 participants in the rec kayak division and more than that in the Fast Touring division.

I’ll probably not come back to this race unless I buy a composite surfski and compete with the more elite racers.  Lack of participation from other kayakers doesn’t make me feel very appropriate in this race.

The race organizers should either embrace kayaks or announced this race is for rowers and surfskis only.

I have my eye on the Think Evo, the Nelo 550, the Epic V8 Pro, or the Stellar SEI, but I would only use one of those boats in one or two races per year and they would not suit my needs for the vast majority of the paddling I do where rocks are an issue.

So I find myself in No Man’s Land with regard to the Wye Island Regatta as I don’t want to invest 3 or 4 grand into a boat that is only suited to a couple races per year, and I don’t feel good about competing with far superior plastic against a limited field.

I wish there was a more affordable option to get into a composite surfski.

Below is my video from the race.  I had two cameras but the rain was so heavy and the water so choppy there was water on the lenses for much of the race so much of the video is unusable.