Friday afternoon I drove up to Pennsylvania to paddle in the inaugural running of the Youghness Monster 25, a 25-mile paddle race on the Youghiogheny River between Connellsville and West Newton, PA.

I got to the check-in to pick up my race packet and immediately recognized some old friends and started making new ones.

First I bumped into Brian Ammon, whom you may recall I first met at the Lehigh Classic race in 2016 and then again at the Little D On The Monocacy race in 2017.  Brian hasn’t changed a bit and is never shy to share stories of paddling adventures which is part of what makes him so charming.  He is a wealth of paddling information and history. 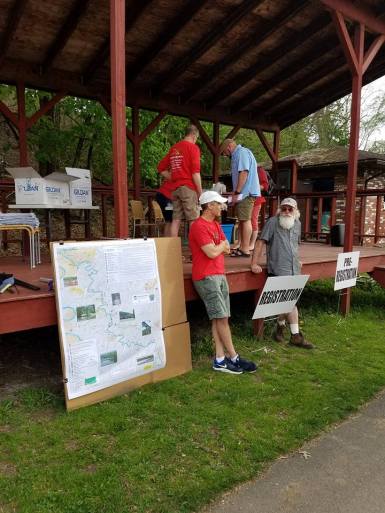 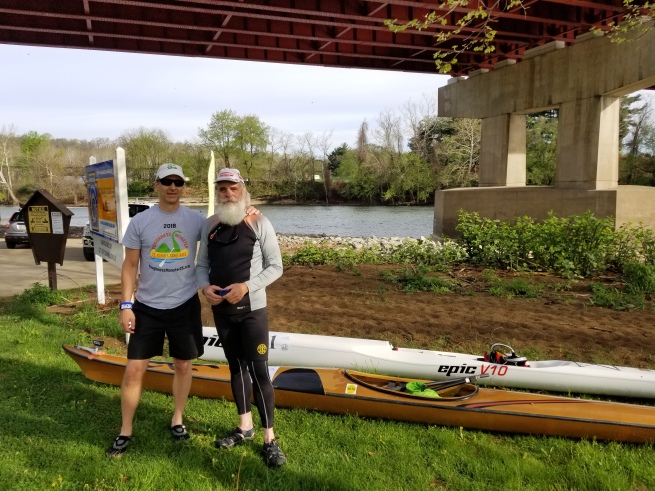 Me and Brian Ammon

I soon then met Hansel Lucas, owner of Performance kayaks who, along with Stellar Kayaks and others, sponsored the race. 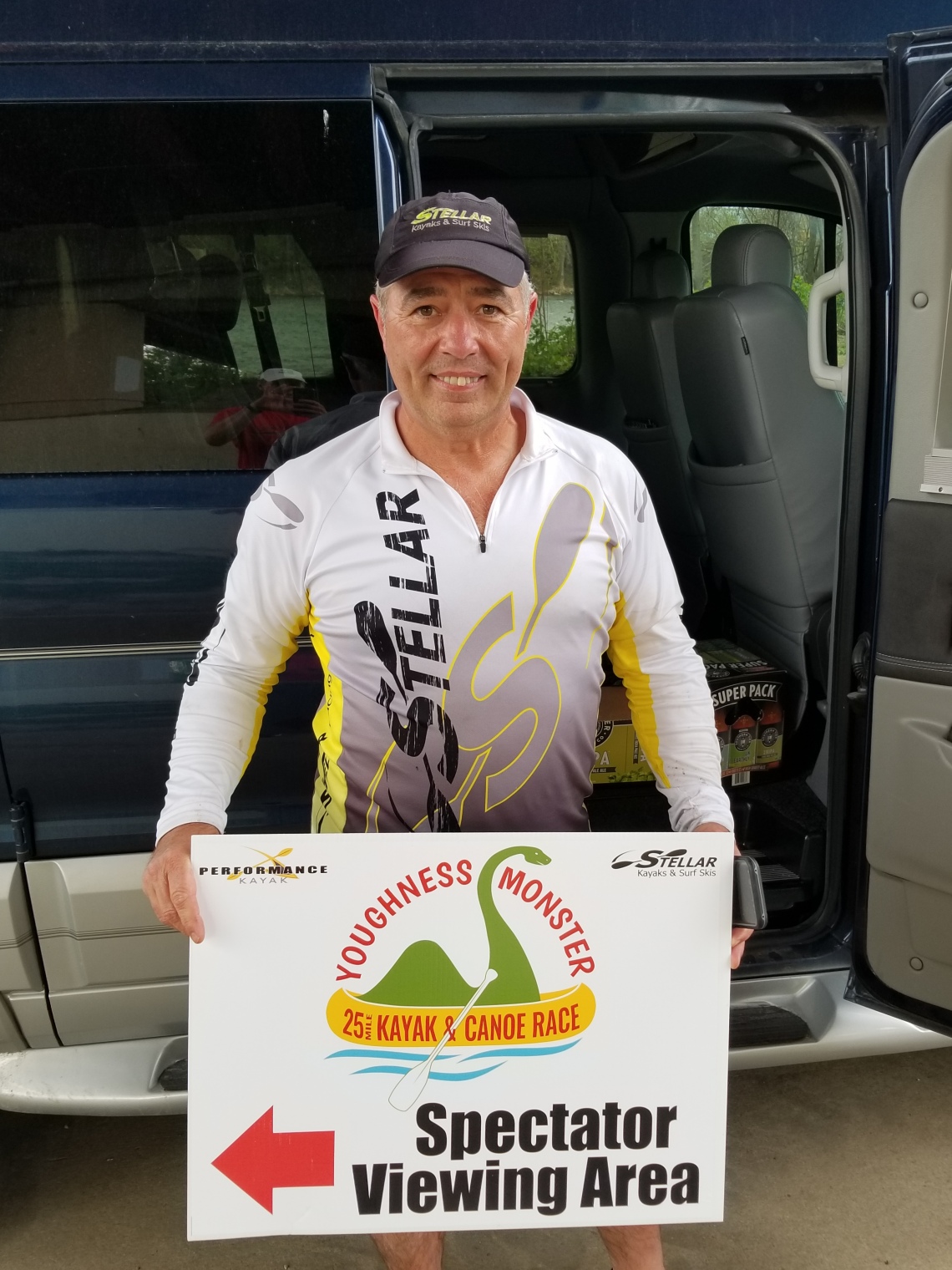 I then also soon met Steve Bruner, who graciously agreed to an interview with me.

Shortly thereafter I headed to Uniontown where I was staying at the Holiday Inn Express.  The rain starting coming down and questions started coming to mind.

How cold would it be in the morning?
Would it rain all day for the race?
How high will the river be?
How shall I dress?
What happens if continuous Class II rapids are above my skills level in this boat?

I took one last look at my boat and then headed into the hotel for some sleep. 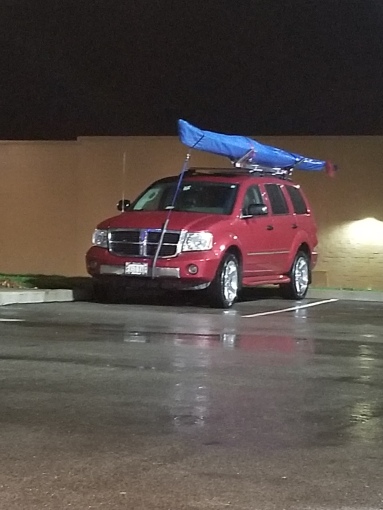 I had some trepidation about this race because it was the first time I was taking my Thunderbolt-X kayak onto any moving water and I was not sure how skilled I would be with her in rapids.  I’ve only used her as a flat water training boat and the thought of rapids bigger than advertised or possibly smashing her into rocks worried me greatly.

Flipping and filling her full of water would equate to “game over” for the race as it would take long time for me to empty her out and recover.

Hansel Lucas assured me the water was at a good level and that the Army Corps of Engineers agreed to release some more water from the upstream dam so the water would come up at least 8″ overnight.  He said he and friends run carbon/Kevlar boats on that section of river regularly and that anything above 4 ft. at the Sutersville, PA gauge was fine for any construction of boat.

I looked at the gauge on my RiverFlows app one last time and saw the river was well above 4K and was already starting to rise, so I felt better about the situation.

The water came up to a great level overnight

The alarm when off 6:30am on race morning and I quickly got ready and ate a breakfast of some scrambled eggs with 2 sausage patties and black coffee before heading back up to the starting line at Connellsville.

I grabbed another black coffee for the road for the 20 minute drive.

It should be noted I had no other food until ~7pm when I stopped for dinner on the drive home.  During the race I only had water in a CamelBak bladder and was not again hungry until well after the race.

Being fat-adapted is great. #NSNG #LCHF

People were starting to gather at the starting line and dropping boats at the ramp.  There seemed to be an inordinate amount of high-end surf skis to me, especially for this land-locked area of the country.

The weather was warming up fast so I realized minimal clothing would indeed be appropriate (even though I brought a wet suit just in case.)  I had safety clothing stowed in my dry bag, but I was not going to start with too much clothing because a body generates a lot of heat when exerting sustained energy.  It is better to get to the side of the river to add layers than it is to try to remove layers due to overheating while trying to paddle and balance a boat.  Just my opinion.

I chatted with several people before the race began and it wasn’t until I was driving home after the race I realized why one particular guy seemed very familiar.  He was Joe White, or JoeDirt22222 on YouTube.

He designed a kayak ergometer which served as the inspiration for my own do-it-yourself, DIY, kayak ergometer design.  Please, purchase one of Joe’s ergometers! Dude is amazing and is an awesome paddler.

There were skis everywhere. Primarily Stellar but Epic skis were also well represented.

We had a pre-race briefing and then the race began.

We were given ankle bracelets with timing chips and walked across a mat to start our time and then went to the water to get into our kayaks and begin paddling.

I allowed the first big wave of paddlers to start first as I hung back a while since I knew I was racing against the clock and didn’t want to be in the first giant cluster of paddlers.  Plus I thought I might get better video if many of the racers were in front of me.

I got in my boat and pushed out and quickly realized something was wrong.

I worked my rudder tiller and realized I had very little control over my kayak.  Not a good thing in a 21′ craft.

I soon surmised my rudder cable fell off my rudder so I paddled back to shore, got out of the boat, slipped the rudder cable back into its track, and then got back in and started paddling.

Already a loss of two or three minutes which didn’t sit well with me.

Oh well, you can’t change it, you just deal with it and move forward.

So I took off downstream and quickly hit the first set of Class II rapids.

I took short, choppy, bracing strokes and essentially “floated” through the rapids trying to remain upright to get a feel for how the boat behaved,  That worked well so I decided that would be my strategy for the day.

Short bracing strokes and conservative through the rapids and give it all I have on the flats.

The strategy worked well and I found myself in 1st place amongst all kayaks at the finish, 5th overall amongst solo paddlers.  With nothing but 4 fast surf skis with elite paddlers ahead of me I felt satisfied with my performance.

It felt good to pass so many surf skis!

This section of river is mostly flat water with numerous sections of Class I and Class II rapids.  The flats aren’t so long as to get boring and the rapids are not threatening and they are plentiful enough to keep you on alert the whole time.

I ran a pretty good race and took some risks in terms of lines chosen and guessed right most of the time as I was often able to gain on the paddlers in front of me by taking a different path around a few islands or taking a different line through the rapids.  I paddled alongside and chatted with a few other paddlers throughout the race and it just reinforced my opinion that fellow paddlers are some of the nicest, most interesting people in the world.

What really kept me going, though, was the fact that my sister was bringing my parents to the finish line to greet me and I couldn’t wait to see them all. 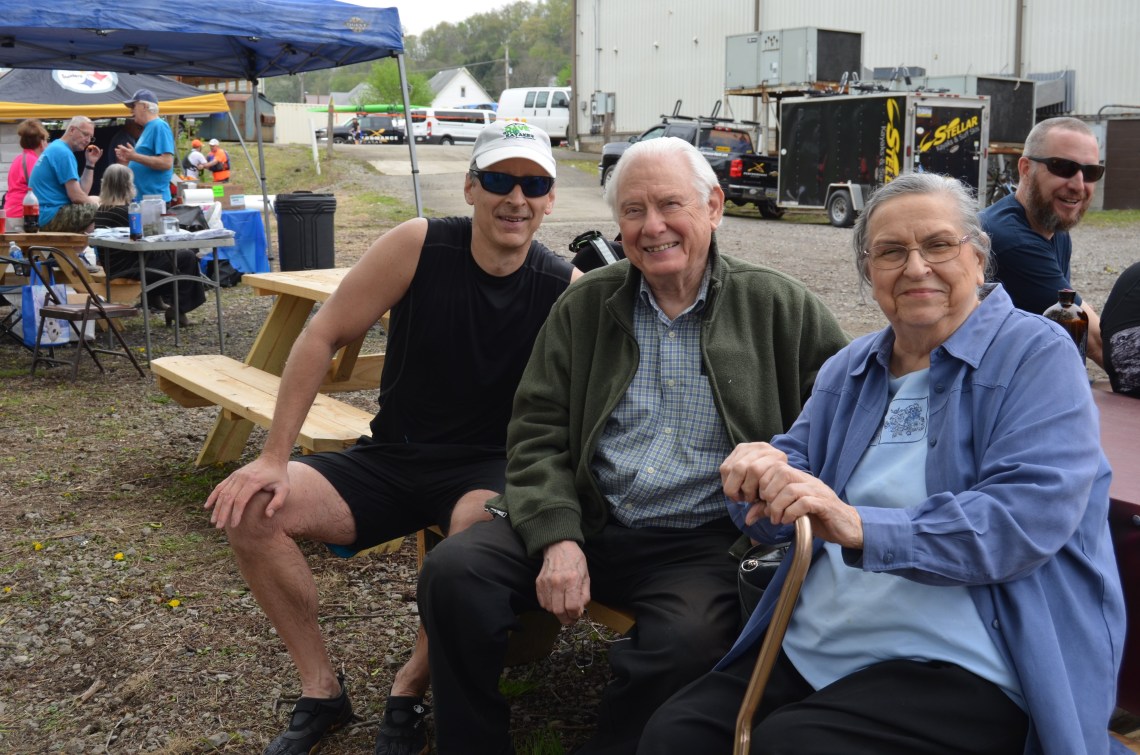 Mom and dad meeting me at the end of the race, the first kayak race of mine they’ve ever experienced. Astute readers may recall them posing with the boat when it was brand new in 2011. 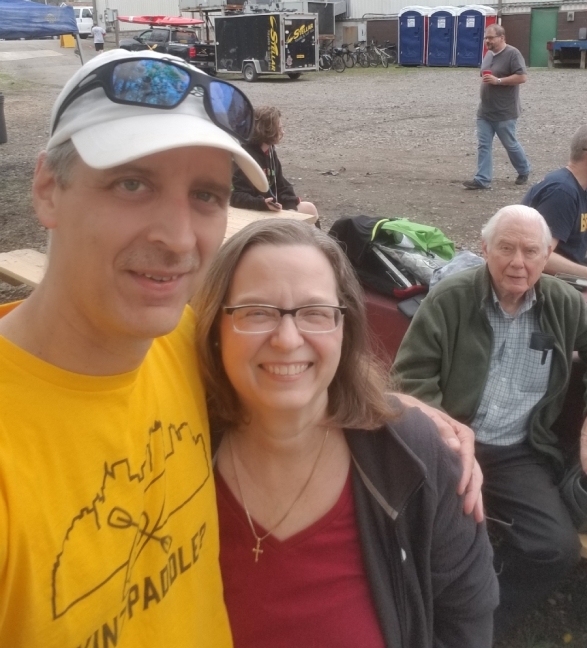 I neared the finish and my eyes welled as I spotted my parents at the top of the ramp.

We got in a great visit for the next few hours and then I headed back home to Central Virginia through heavy thunderstorms.

It was a long day but a wonderful day.  Physically I felt fine and felt as though I could have easily paddled another 25 miles.

The organizers of this race did an amazing job for a first time race.  The awards ceremony was a bit of a letdown since there were technically no awards, but that did not diminish a wonderful experience on a very scenic river and a very well organized event.

I look forward to paddling this race in future years.

In the meantime, come paddle our local race in Charlottesville this Saturday, May 12 with me!

Here is the entire race from the bow of my boat, reduced down to ~43 minutes.  Happy viewing and happy scouting to those who race in future years!