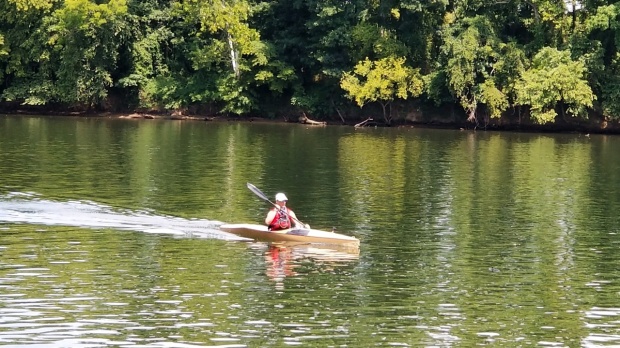 Getting to the finish line in my Phoenix Match II kayak

This race is really a story of two races.

Well, actually, it is a story of three races as this event started out as a stand up paddle board race and then last year Crosswind Paddle Co. added a 17-mile kayak race element to it to take up the void left when the James River Association decided to cease organizing the James River Rundown.

So the main part of this race is a 5-mile SUP & kayak race, but I did not participate in it so I can’t speak to it with any firsthand knowledge. But it looked like all of the participants had a great time when I joined them at the finish line.

So that leaves us with this year’s 22-mile downriver kayak race, which in and of itself, is really like two different races because of the change in water conditions.

The 22-mile race started at Powhatan State Park and ended in Midlothian, VA, just outside of Richmond

Weeks ago I thought if we got a lot of rain to bring up river levels I might actually use one of my higher-end boats but as race day got closer, the weather stayed dry and the river gauges got lower and lower.

So I had to decide on a boat the night before the race.

I raced my Nelo 510 last year so this year I wanted to try something different.  Since I realized we’d probably bump into and scrape over some rocks, I went with an unconventional choice: my Phoenix Match II downriver racer.

I thought the Match II with its combination of fiberglass/Nylon construction would provide me an advantage over longer, plastic boats in the shallows and over rocks and hopefully give me enough of an advantage in those upper sections to be toward the front of the pack and in contention at the end of the race.

I was half right.

I also knew it was going to be a very, very painful experience because the Match II is a very uncomfortable boat for any length of time and the only way to steer it (since it doesn’t have a rudder) is to lean it pretty aggressively from side to side.  I’d raced it once before in a 15 mile race and thought that was the absolute upper limit in terms of comfort.

Turns out I was fully right on that one.

The boat kept me out in front for the first 15 miles of the race which is the section with rocks and a handful of rapids, but I was not able to put much space between me and John McCue during those 15 miles.

For the last 6 miles of the race, the river gets deep and slow and then the race becomes very much like an open water race.

Two races in one.

John had his Epic V7 (I knew that in advance) but Ryan M. had showed up with an Epic V8.  I immediately thought they’d finish one and two on the day, but unfortunately Ryan had on an understern rudder and he and it did not fare so well in the earlier portions of the race, even though he and John ran with me neck and neck for a solid 4 or 5 miles.

I scraped over numerous rocks and took one solid hit so I was happy I was not beating up one of my treasured, composite boats.

But honestly, I was hoping for more rock contact than there was to help me out on this section by slowing down the others more than me.  I knew the drag on my shorter boat was less in the shallow water than it was on the longer boats and I also knew I’d skid off rocks easier than plastic boats would, but it was not enough to make the difference on this day.

I knew I was taking a calculated risk when I chose the boat.

We averaged 6.6mph during those first 5 miles and I recorded a top speed of 8.5mph.

Only 6 of us raced in the 22-miler so that made us a tight little fraternity.

Overall I was pleased with my race but when we hit that last 6 mile section of river, John passed me and it was apparent fairly quickly there was no way I was going to catch him.  He is a better paddler and was in a superior boat for open water and my light, little boat was catching the wind under its wings and became difficult to keep in a straight line in open water with a wind and speed boats creating large wakes.

I was turning in sub-10 minute miles until the last three.

John McCue paddled like a champion to take 1st place 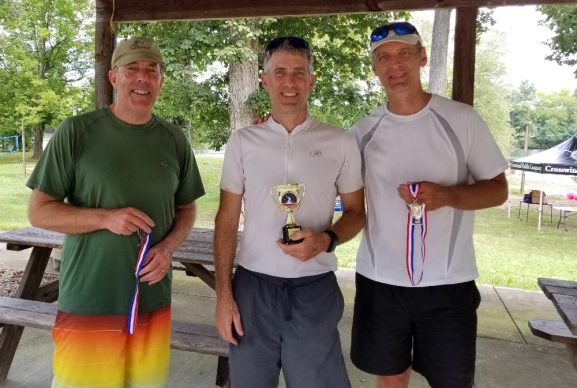 I was very pleased to take 2nd place some 2 minutes and 44 seconds behind John, thrilled that John took 1st, very happy that new acquaintance and paddling friend, Griff, took 3rd and happy to hear that paddling buddy and fellow Charlottesville-area paddler Shelli took first place for women in the 5-mile kayak race, but since there were only 3 kayaks they gave her third placed lumped together with two other men who paddled. 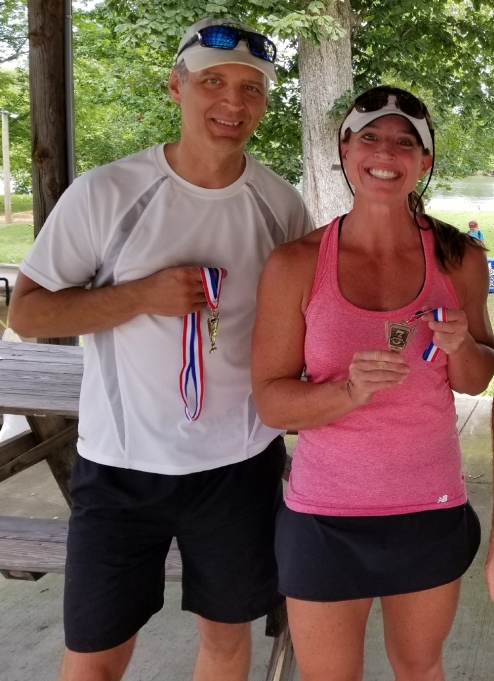 Shelli and I taking some more hardware back to Charlottesville

This is a great race and I hope more people come out to support it next year as it is one of the longer races on the East Coast.

True, it lost momentum and awareness when it was no longer called the James River Rundown, but with the proper support from racers we can return it once again to its former glory.  (Especially if a kayak company were willing to combine forces with Crosswind Paddle to expand and the enhance the race for kayakers.)

With enough word-of-mouth and participation in the future, this race could become one of the premier downriver races on the East Coast.  Crosswind Paddle Co. expanded it from 17 to 22 miles this year in response to feedback last year, so hopefully we can support them in the future and eventually help it become the endurance race that the James River Rundown once was.