Shortly after the Wye Island Regatta kayak race in Sept. 2010 I purchased a wing paddle.

Wing paddles came into prominence during the mid-1980’s and, as rumor has it, started with the Swedish national sprint kayak team and quickly spread to all Olympic paddling teams.

The wing paddle blade is literally shaped like an airplane wing and provides “lift” when paddled correctly which increases efficiency by 3-5% or more.  Greater efficiency means greater speed. 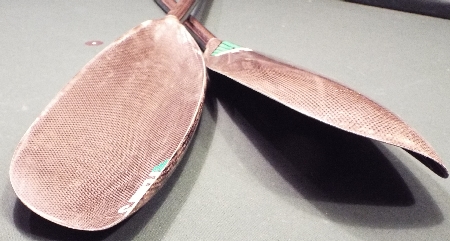 The “lift” provided can best be envisioned by imagining a horizontal airplane wing.  When air passes by an airplane wing, the air passing on the top or convex side of the wing has to travel a slightly longer distance than the air passing under the wing so it moves faster and creates a low pressure.  That pressure differential is what creates “lift.”

Now if you imagine that same wing but place it vertically in water, the same theory holds true if the blade is moved the proper way through the water.

The proper way to move a wing paddle blade through water is using a motion that would create flow from the front of the wing to the rear of the wing, if we use the airplane wing analogy.

When the wing is vertical and the paddler is sitting, what that means is the paddle has to move in a side-to-side motion rather than a front-to-rear motion.  This is accomplished by plunging the blade into the water near the boat, taking a stroke back but away from the boat, lifting the paddle blade out of the water, and then repeating the action on the other side of the boat, over and over again.

When done properly, the blade of the wing will actually exit the water in a spot ahead of where it was put in.  I know that sounds crazy, but I’ve been able to confirm it many times when there have been a few leaves on the water which allow for reference points.

I practiced and practiced with the wing paddle until the motion felt natural and my speed increased significantly.

One additional key to using a wing paddle is that the paddler must rotate his or her body above the hips to take full advantage of the stroke.  This is best achieved by pressing forward on the stroke-side leg so the hip drops and allows for full rotation.  I could quickly geek out on this subject but it really is a technique which requires its own study and books have been written on the subject so I’ll just stop right there.

The wing paddle took me months to master, and in some sense, I think everyone who uses one is always trying to improve with it.  I knew I was onto something because my typical flatwater workout paddle is a 5-mile sprint and then a brisk pace back for a total of 10 miles.  Prior to the wing paddle I was posting 5-mile times in the Cobra Viper of ~5.2mph.  After several months with the wing paddle I was paddling the Viper at 5.7-5.8 mph.  A huge improvement.

Below is some video I shot after I bought my second wing paddle.  My technique was not great yet and my hands were too close together, but notice the difference in the stroke from a traditional paddle and notice the rotation of the body.

A true paddler paddles from the abdomen and legs, not with the arms.