I took some vacation time with the family last week and managed to get on the water 3 times.

The first couple outings were in and around Presque Isle State Park in Erie, PA where I explored Misery Bay and the nearby lagoons and then out into Presque Isle Bay in my Nelo 510.

I paddled 8-10 miles each time keeping up a brisk pace in order to get in some quality training miles.  Presque Isle Bay also provided me some bigger waves and chop than I’m used to so I gained some experience and confidence with boat wakes and waves hitting me from different directions. 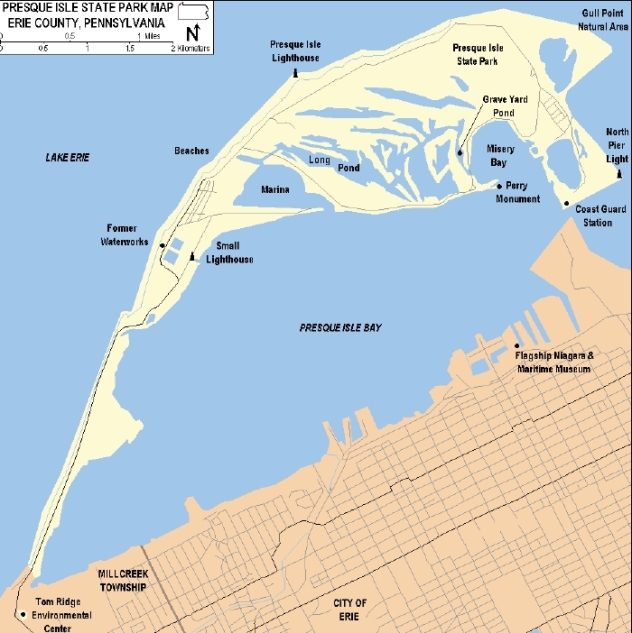 Presque Isle, Erie, PA and a GPS trace of my actual out-and-back

Then at the end of the week I shifted gears and and got ready for the main event: The Pittsburgh Paddlesport Championships, a kayak, canoe and SUP race in downtown Pittsburgh.

Once again our friends at Performance Kayak, Inc. organized the race in coordination with the American Cancer Society and the EQT Three Rivers Regatta.  The organizers did a fantastic job with this first-time event and I have full faith and confidence the event will get bigger and even better in the future.

I grew up north of Pittsburgh, about 20 miles north on the Allegheny River, so it was a bit ironic that my issued race number was #28 as my hometown is ~ 20 miles away–north on PA Route 28.

This race was especially exciting to me since I was back home racing downtown in the city I love. 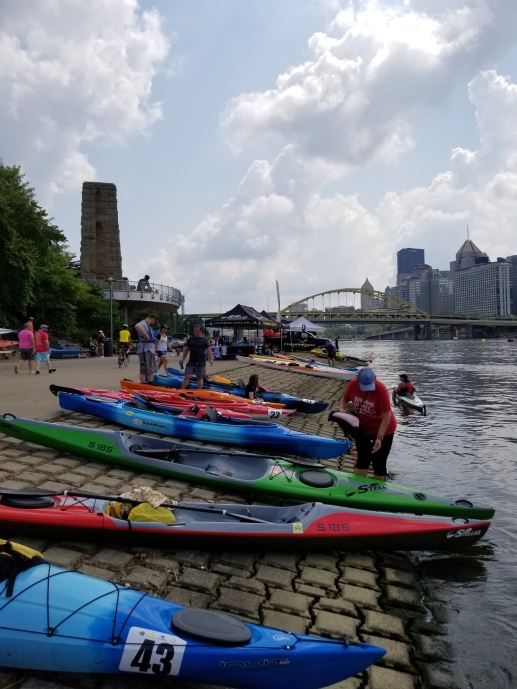 Racers preparing at the starting line right next to Heinz Field

I raced in my Thunderbolt-X kayak and as such, was placed in a category with some elite paddlers and surf skis.

The race course, launching from Heinz Field and starting at Point State Park

Before the race I was chatting with spectators on land and was unaware of the time so the actual start of the race caught me a little off guard and I once again started near the back of the pack but worked my way through the main pack fairly quickly and made good progress by the time we hit the Ohio River and I was passing some of the top 10 near the USS Requin submarine.

The biggest challenge of the race, in my opinion, was crossing the Ohio River because the wind was blowing slightly and it created upriver chop that hit the right side of our boats, so I was forced to take shorter, choppier strokes than I would have preferred in order to brace and steady myself.  But then once we got to the other side and paddled upstream, I found I was able to actually catch and surf a few waves.

I was very excited the whole race and tried to look up and appreciate the beauty of the city.  Spectators were gathered at Point State Park and cheered us as we paddled by and that gave my spirits a huge lift.  There was another cheering section at Heinz Field so yet another boost from the crowd, which is an environment I’ve never experienced during a race.

I managed to take 5th place overall amongst solo paddlers, and 3rd in my division which was one notch down from the ultra-elite, Unlimited division.  I was very happy with this performance.  I was the first true kayak across the finish line with nothing but surf skis ahead of me.

Honestly, had I known I was competing against the surf skis I would have raced a different race and pushed harder (I had it in me,) but I thought I was racing against true kayaks, so once I knew I was in front of the rest of them I went into “defend” mode and was racing not to lose.

I had no idea I should have been aiming for those skis ahead of me the whole time.

Overall it was a great experience and I’m able to share my video with you below.

But before I do that, I must thank everyone who supported me through sponsorships/donations for the American Cancer Society.  Together we raised $551 for ACS.

I especially want to thank 10th Life Kayaking and Paul Luc for very generous donations.  What they did was inspirational.

So check out my video below and enjoy the ride!

PS – And my nutrition for the race?  I ate the Meat Omlette from the Gateway Grill at 7am, had nothing but water during the race, and did not need to eat anything until my drive home at 8pm.